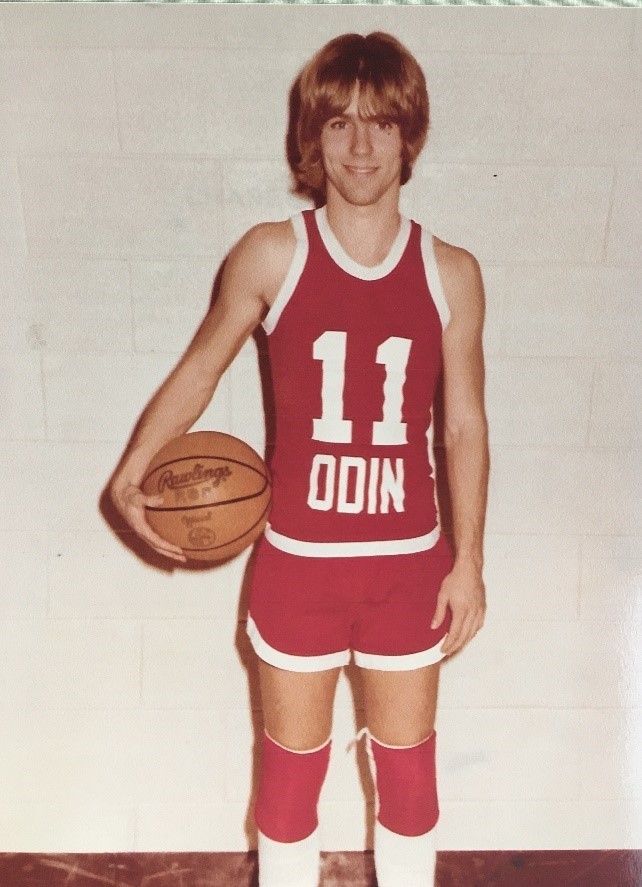 The Odin Public School Hall of Fame Ceremony is quickly approaching and tickets are on sale to the public.    The event is scheduled for June 12 with a dinner from 4:00-6:00 PM and the induction ceremony to follow.  The school district will induct five Hall of Famers on that Saturday:  Roger Williams, Holly Cerny, Stan Jones, Gary Boles, and Tammy Burton.  If you attended school during a time when any of these individuals roamed the halls, you might need to reserve your seats today while they last!  As the date approaches, we will celebrate each of our inductees!  Today, we honor Roger Williams!

Roger Williams made an impact on the hardwood as well as the baseball field during his four years at Odin High School.  To highlight his accomplishments, we have listed the awards he received for both basketball and baseball. In basketball, he lettered all four years and was recognized on the Egyptian-Illini All Conference Team during his sophomore and junior years.  When the school changed to the Midland Trail Conference his senior year, he would also be named to the Midland Trail All Conference Team.  When the conference tournaments were played each year, Roger Williams was also named to the All- Tournament Teams during his sophomore, junior and senior years.

Roger broke out his sophomore year, leading the team in scoring, free throw percentage and being named the team’s most valuable player in just his second year.  He would duplicate these feats his junior year being named the team’s most valuable player, making first team all-conference and lead the team in free throw percentage.  Upon his graduation, in 1979, Roger was the second leading scorer in Odin School History with 1,568 points.  He is currently the school’s 5th leading scorer all-time.

In baseball, he lettered each of his four years, and like basketball, was also named to the all-conference teams during his sophomore, junior and senior seasons.  He led the team in hitting during his junior year and was a member of one of the four Odin High School Teams to win a regional title (baseball-1979).